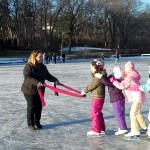 We were out on the ice almost all day yesterday, and we had a lot of fun. Many of you who have already been in our stories were out there, like Verona-Glen Ridge Hockey team coach Stephen Ruggerio and several members of his team. Coach Ruggerio was part of a hockey game that spanned kids, teens and adults, and the skating of Verona Police Department Lieutenant Chris Kiernan gave new meaning to the term “police athletic league”.

Cassidy Herko, an F.N. Brown second grader who’s only been skating for a year, stunned us with her spins, which you can see in the video below. (Her older brother was guarding the goal in the hockey game.) We’d also like to say thanks to Eight Hills Caterers, which dropped off a huge, and much appreciated, container of hot chocolate.

Most of you who were out there were just enjoying an all-t00-rare day of outside skating. But some of you got stupid. You went out on the ice way beyond the barricades, out past the island and near the waterfall, where the ice will always be thin. We won’t name names or post a video of you twirling your lacrosse sticks as you walked. We certainly hope you won’t go through the ice, but we think it’s a pretty good guess that if you do, Essex County will shut down the skating for all of us. And that wouldn’t be fun for anybody.

Previous article
My Search For A Nursery School
Next article
Belt-Tightening In Maplewood, Montclair