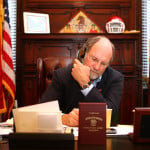 The state giveth and, now, the state is trying to taketh away. Outgoing Gov. Jon Corzine decided this week to try to narrow New Jersey’s $924 million budget gap by taking away aid to school districts and making them use any surplus they might have to fill the resulting shortfall.

That could be bad news for Verona, which has a surplus–barely. “I think such an action would be disastrous for schools”, says Verona schools Superintendent Charles Sampson. “Currently we are allowed to keep a 2% surplus. To use this money for state aid would force a district like Verona to operate dangerously close to the red. The 2% surplus allows us to mitigate unanticipated large scale expenses. To cut into that money would be potentially problematic.”

But before you head to the ramparts, know this: Corzine’s plan needs the OK of the state legislature and, if approved–a BIG if–wouldn’t take effect until February, after Corzine is out of office. Which means, of course, that it might not happen at all. Sampson seems optimistic this will be the course of events. “I do not believe this proposal will come to pass,” he says, “but stranger actions have occurred.”