The Search For Meaning In Verona

It’s not every day that one of your neighbors is competing with the Dalai Lama.

But that’s exactly what’s happening: A book written by Laura Berman Fortgang, a life coach who has lived in Verona since 1995, has been chosen from among 500 other books on spirituality to be one of five finalists for the Books for a Better Life Awards, sponsored by the National Multiple Sclerosis Society. In addition to the Tibetan spiritual leader, the other authors are Pema Chodron, Harold Kushner and Thomas Moore.

The Little Book on Meaning: Why We Crave It, How We Create It started out as something of a joke. Fortgang was having lunch with friends a few years back when they began to talk about what they would do in retirement. When it was Fortgang’s turn she blurted out, “become a minister.” No one was more surprised than she. “I was raised Jewish,” says Fortgang. “The words ‘Jewish’ and ‘minister’ don’t go together.” 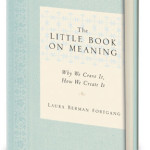 The lunch-time quip took on a life of its own. Fortgang tried to see its meaning as an analogy for her work helping executives through career crises. She tried quelling it by getting a quickie ordination over the Internet. “That worked so well that I was called on to speak for my publisher’s minister in a sermon,” quips Fortgang, the author of three other best-selling career books.

Finally, Fortgang enrolled in the One Spirit Interfaith Seminary, a New York City-based school that studies 14 major religious traditions. She commuted in for two years of courses while raising three children and running her business, InterCoach Inc. In 2006, she was ordained an interfaith minister and finally, she found the reason for her off-hand remark so many years earlier.

“My publisher had been asking me for a new book the whole time I was in school,” relates Fortgang. “Then it hit me: My clients were longing for meaning. Even before the crash, they were telling me, ‘I have everything, why am I not happy?’ They were looking at career changes and they couldn’t find meaning. They were looking everywhere and couldn’t find it.”

Fortgang believes that meaning comes from connections, and she has rededicated her work to helping her clients reconnect with what they truly want out of life. “I no longer believe in career crises,” says Fortgang, “even though that is what my clients come to me for. I believe every career crisis is really a spiritual crisis. You have gotten off track from who you are and what you want.”

Despite her ordination, Fortgang has no plans for a clergy career–at least not full-time. “I haven’t changed my shingle from coach to minister,” she says. “But there are no bones about my philosophy now.”

Fortgang recently spoke with MSNBC about how moms can find meaning in the holidays despite tough times. Here’s that interview:

The Books for a Better Life Awards will be announced February 22.